What if you were an indigenous weaver and had studied your own culture’s basketry for years?  What if you had the opportunity to step outside of your own culture and comfort zone to learn what it’s like to make a Haida, Tsimshian, Paiute or Arapaho basket?  That’s exactly what over 100 weavers had the opportunity to do last week when they attended the “Weavers Teaching Weavers Conference” 2012 at the Northwest Indian College in Bellingham, Washington.  The multi-day event allowed for top artists in their own cultural traditions to get a taste of other styles and materials.  They came from all over the United States and Canada as well.
Some of the participants in the event included top, award-winning names such as Lisa Telford (Haida), Carol Emarthle-Douglas (Arapaho/Seminole), Loa Ryan (Tsimshian), Terrol Dew Johnson (Tohono o’odham) and Jacqueline Rickard (Walker River Paiute).
The conference culminated in an artist’s market at the Whatcom Museum’s Old City Hall building on Saturday, April 14.  I had the opportunity to talk to some of the artists about their work and their participation in the “Weavers Teaching Weavers Conference.”  It was wonderful to sit with them, hear their stories, and watch all the detailed work that goes into creating such exquisite pieces of functional art.
In addition to this video that includes snippets of footage, I will also be featuring full interviews with some of the artists about their individual work later on Uncle Paulie’s World.  For now, watch this cool video recapping the “Weavers Teaching Weavers” event HERE.

These days, I am completely fascinated by most things “low-tech 101,” especially complicated and time-consuming artistic processes.  Seeking out things low-tech has become a bit of a hobby for me, in these days of society’s overwhelming total embrace of everything electronic. I guess you could also say that one of my hobbies is coaxing out the true character of people to make for interesting conversation.   It’s a passion of mine to make the subjects who I interview feel at home in front of a camera, so much so that they relax. It is then that the viewer feels as though they are privy to the conversation as well.
A couple of Saturdays ago, I had the pleasure of meeting and observing Kwakiutl-style carver Gary Starr at work.  I hesitate to use the term “Kwakiutl-style” because Starr’s work is innately Kwakiutl given his upbringing.   Born in Rochester, New York, Starr’s biological father is Cree.  His mother, who is Six Nations Mohawk, later married Reg Scow, who is Kwakiutl from Alert Bay, British Columbia.  Starr was raised in Vancouver.  While he never participated in the Kwakiutl dances himself, he was always around Northwest Coast carving and learned his technique from well-known carver Barry Scow.  Starr has always considered Reg his father and considers Barry his mentor.  When asked if he ever felt like an outsider because of his non-Northwest Coast heritage, Starr said that that never occurred to him.  He was grateful to have been able to learn how to carve.  Through and through, he considers himself a Scow, and his purpose is to be the best carver he can be to honor his father Reg and his family.
The process of creating a Northwest Coast carving, like all arts, is labor-intensive.  Starr, who is known for his masks and highly articulated puppets, including minatures, makes no bones about letting us in on the source of his wood–the local lumber mill.  Starr seems to dislike smoke and mirrors when it comes to who he is as a man and as an artist.  Once he feels comfortable enough to let you past his initial quiet and contemplative exterior, you realize that below the surface lies a highly-intelligent, unapologetic, though incredibly sensitive man, who likes to make jokes both about the serious and the mundane.  At the mill, he seeks out pieces of cedar that fit the size of the concept he has in his mind. Sometimes he has to pay for the wood. Sometimes, he gets the scraps for free.  Often, he doesn’t know what he will carve and lets the wood, its texture and shape guide him in the design. He jokes about being younger and not understanding the concept of letting the wood “speak” to him about what shape it wants to take.  As an adult, however, Starr is clear about how the relationship with the spirit of the wood is key in making the piece exceptional. After all, the tree once was a living thing and deserves to be honored.  In the selection process, identifying wood that lacks knots is a requirement since knots can hinder the crafting process and are detrimental to the physical strength of the piece.
On the day that I met Gary Starr at Cedar Works Gallery, a Lummi Nation artist co-operative in Bellingham, Washington, the artist decided to carve a “simple” portrait mask.  Starr was nice enough to let me video and photograph the three-hour demonstration to show every step of his carving process. As he worked, Starr retiterated what his mentor taughth him–always redraw the pencil lines once the cut has been made. This will ensure the piece’s symmetry  A lover of good music, Starr is used to jamming with heavy metal music playing in the background.  With us he chose to whistle, which functioned as a surrogate soundtrack to the very arduous carving process.  Throughout the three-hour demo, Starr showed his keen sense of humor and waxed sentimental about his love for his children.  In that amount of time, Starr was able to complete about 1/3 to 1/4 of the work.  Watch my interview with Gary Starr HERE. 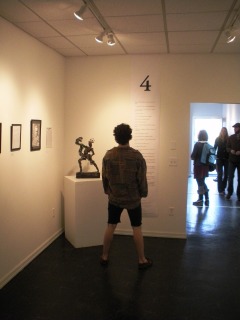 When most of us think of prison inmates, we think of angry criminals getting exactly what they deserve.  We are least likely to think of the soft side of these men and women who are incarcerated for crimes that in our minds they obviously committed.  The public seldom feels compassion for these people who have made grave mistakes, and typically, their lives and goals hold no interest for society at large.
A new exhibit “Inside Out” at Make.Shift Project, an arts nonprofit in Bellingham, Washington, challenges public opinion by giving spectators a glimpse into the thoughts and personal lives of offenders in the Whatcom County Jail system.  The jail is home to 370 inmates, and all were invited to create original art using the limited materials they had available to them and to take park in a showing of their work.  The participants were also asked to price their work for possible sale.

Interestingly, curators at Make.Shift Project did not receive any art from female offenders.  They did, however, receive a great deal of work from male inmates, with pieces ranging from dark to touching.  Some of the artists were more prolific than others and sent in a dozen or so works, while others provided just one.  Regardless, 90% of what was received was hung in the exhibition.
Organizers are hopeful that “Inside Out” will change public perceptions of inmates.  They want people to leave the gallery understanding that many of these offenders have undiscovered talents, and since the offenders are also community members who are friends, family and neighbors, the show gives them a way to indirectly interact with the community at large.

Another takeaway from the eye-opening exhibit is the knowledge that art programs and recreation programs are nonexistent in Washington State prisons because of the lack of funding for such projects and across the board budget cuts.  Make.Shift Project staff are encouraging people to write the state government to petition them to provide funding for potential programs that could tap offender creativity and help to rehabilitate them.
On April 6, I had the opportunity to interview Make.Shift Project Director Cat Sieh and Whatcom County Jail Chief Wendy Jones about “Inside Out,” which runs through May. Watch my interview video HERE.
Ever wondered how those Northwest Coast Native artists create such beautiful wood carvings?  In April, I will be featuring an interview with Cree/Mohawk carver Gary Starr, who was raised by his stepdad Reg Scow, a Kwakiutl from Alert Bay, British Columbia.   Barry Scow, a well-known carver, taught and mentored Gary, who is known for his incredibly articulated masks and puppets.

Today, Starr made a visit to Cedar Works Gallery in Bellingham, Washington to participate in a public demo.  Here is a teaser which speeds up the carving process for your enjoyment.  The music you hear in the background (“Return”) is from Shelley Morningsong’s latest NAMA Award-Winning (“Album of the Year)CD “Full Circle.”
﻿

If you watched the 2010 Vancouver Winter Olympic Games (and who didn’t!), you are quite aware of the level of respect that officials showed the people of Canada’s First Nations in the opening and closing ceremonies. The focal point was highlighting Canada’s cultural and historical richness, and they did it with such national pride. The fact is that in Canada it is difficult not to see the influence of its indigenous people and feel their presence all around you. It is something that I noticed and fell in love with when I first visited Vancouver in 1993.

The American Southwest, while a totally different flavor, has a similar energy. For me, one of the perks of spending the last three years in New Mexico was having the opportunity to experience Native American culture first-hand in the places where people have continually lived and practiced their beliefs for hundreds of years (and in some cases, more than a thousand years).  It would be hard to ignore that kind of rootedness. And why would you want to ignore it since there is so much to learn about Humanity and nature?  What is also wonderful about interacting with a living culture is seeing how it adapts to the world around it and how its inhabitants, who participate in the outside world, respond to those influences.

In recent years, younger, contemporary Native American artists in the Southwest are reclaiming their cultural pasts–stories, iconography and handicrafts–to create new contexts in which a cross-section of mainstream society can experience and interpret them. This is also happening across the country with young Native artists from a variety of tribal backgrounds. While centuries ago, handicrafts were thought to be more utilitarian than what we think of today as “art,” these forms still actively changed as Native Americans came into contact with other tribes and cultures and learned new “technologies.”  Being contemporary is something that has always existed in Native arts.  In the present, what seems to tie young Native artists together, no matter the tribe or medium, is a focus on everything urban.  This is representative of the larger shift that is happening in both mainstream youth culture as well as in contemporary art, undoubtedly brought to light by easy access to technologies that have made the world even smaller and more connected.

It makes sense that in Canada, which is full of generational indigenous artists, the same phenomenon would occur. In late February, the Vancouver Art Gallery opened an exhibition entitled Beat Nation: Art, Hip Hop and Aboriginal Culture that celebrates this shift in thinking and form. Beginning in the early 1990s, the Hip Hop movement became a strong catalyst for activism in Coast Salish Nation communities.
“The roots of hip hop culture and music have been transformed into forms that echo current realities of young people, creating dynamic forums for storytelling and indigenous language, as well as new modes of political expression.”
While Beat Nation uses Hip Hop as a reference point from which to begin, the exhibition features the work of artists “who use pop culture, graffiti, fashion and other signifiers of urban life in combination with more traditional forms of Aboriginal identity.”
Beat Nation: Art, Hip Hop and Aboriginal Culture continues through June 3 at the Vancouver Art Gallery, located at 750 Hornby Street, Vancouver, British Columbia. For more information on the exhibit visit their web site or call 604-662-4719.