There are many reasons why people call New Mexico “The Land of Enchantment.” Just look around you and you can’t help but be impressed by the geography and natural beauty. Every time I head home towards the east in Albuquerque, I am moved by the grandeur of the Sandia Mountains. Driving from the west to the east at night along the Paseo del norte is one of my favorite pleasures because you can see the twinkling of the lights all the way up to where residential lines end and reservation land begins. Even when I feel unsettled or grumpy, those mountains bring me back to a centered peaceful place in my mind.

New Mexico also enchants people from around the World with its rich cultures and traditions. Perhaps one of the state’s most enduring traditions is the annual Indian Market that takes place on the Plaza in Santa Fe every August. The event brings together approximately 100,000 collectors and 1200 artists from 100 tribes, making it the World’s largest and most prestigious Native American arts show. It’s basically the Broadway Flea Market or the Super Bowl of Native American arts, which is why I was thrilled to be able to attend Indian Market for the first time this year.

My wonderful new friend Cypriana Toledo, a potter from the Jemez Pueblo, who creates pottery in the old style, using red clay and bright acrylics, met me at the Market during the early morning set-up on the Plaza. The night before, on the phone, she had mentioned that she wanted me to meet some of her artist friends. I thought to myself “That would be very nice.” But, when she made the rounds with me, and I had the opportunity to get to know the likes of well known potters such as Maxine Toya, Fannie Loretto, Kathleen Wall, Alfreda Fragua, and more, I felt like a Hollywood celebrity gawker. I’m still in a dream-like state and feel truly honored to have been personally introduced to them all and to be able to call them friends.

In addition to all of the potters, including the very charming Margaret Garcia of Acoma, who made me fall in love with her colorful storytellers, I had the chance to meet Zuni carver Alan Lewis, who makes amazing Cottonwood corn maidens and sculptures. A major highlight was visiting with Yellowman, who is, perhaps, my favorite Native American painter. 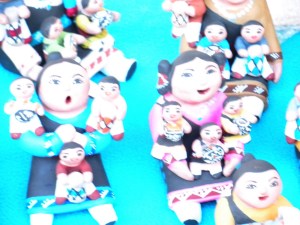 Later in the day, as we sat in the shade of the Plaza confiding in one another, Cypriana, or “Pana” as she is known by many, told me she knew that “this Indian Market was going to be special.” Indeed, it was Pana, and I was honored to be a part of it! To all the artists who agreed to be part of my Indian Market video documentary, my humble thanks.