This past Tuesday evening, I had the opportunity to attend a wonderful art opening of a new exhibit curated by Ken Ratner at Flushing Town Hall on Northern Boulevard in Flushing, Queens. If you’ve never been to the space, you don’t know what you are missing. It was constructed during the Civil War and has been everything from a theatre to a prison as well as other things less than pretty and has withstood the test of time. P.T. Barnum and Tom Thumb played there and it is the place from which the North sent troops off to battle during the Civil War. I had the pleasure of performing in the musical RAGS there in 2001 and loved every moment I spent there. Flushing Town Hall, just a few blocks from the Flushing Main Street Long Island Railroad stop on the Port Washington line (2 stops from Manhattan’s Penn Station/15 minutes), is also home to a performance hall, which doubles as an event space, an art gallery and a sculpture garden. It’s a wonderful piece of history maintained by the Flushing Council on the Arts and Culture.

After leaving the office later than usual, I rushed to get my train to Queens so that I would still have time to snag a glass of chardonnay and amply meditate on these artists’ works. Harried, breathing heavy upon entering the edifice, I was greeted by my old pal Mel, who is the resident security guard and a performer himself. Then I proceeded to run into another friend Clyde Bullard, who runs Flushing Town Hall’s jazz series. The evening was clearly winding down, and those who remained were ferociously gathered around the food table, which sent an aroma of warm brie and fruit into the air. I made my way to the bar where I was privy to the last bit of white wine.

Now, with my heart rate finally falling back in line with those of the other people in the room, my eyes began to adjust and I was immediately pulled towards a painting by Elinore Schnurr. The more I looked, the more I was sucked into a very familiar world– this one oil on canvas–where I recognized the overstuffed chairs and lamps, vintage and cozy, as if they were in a dream or a past life. The thought came to me, “That looks like Caffe Raffaela,” one of my favorite hangout spots in the West Village (now closed and forgotten by many, but held lovingly in my memory) from earlier in the decade. Of course the description plate on the wall confirmed that it, indeed, was Caffe Raffaela, and I was transfixed for five glorious minutes thinking of a rich cappuccino and a slice of mouth watering carrot cake. Thanks for the trip down memory lane, Elinore!

While Schnurr’s work is softer and moody, Sonya Sklaroff is quite adept at painting a very familiar New York as well, but in photo-like depictions that boast bold and bright colors, as is seen in her work “Downing Street.” Sklaroff so brilliantly captures the color, tone and crispness of, what I refer to as , one of those “classic New York City skies.” I could scarcely believe that I was indoors and not in the middle of the scene, feeling a fall breeze that carries the scent of lunch from a nearby deli.

Both Lynn Jadamec and Lisbeth Fermin’s work seem to combine the splendor of Sklaroff’s cityscapes with Schnurr’s use of the personality and emotional tension of the the diverse faces found in the Big Apple. From the morning sunlight upon a pedestrian in Williamsburg, Brooklyn by Jadamec to the colorful freneticism of an Asian woman on a cell phone in Chinatown by Firmin, they both give the spectator a complete tour of New York City and its people without ever having to get on a train to Manhattan. 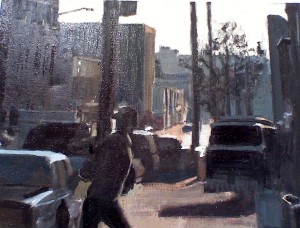 Reminding us of the harsh and pensive nature of a New York winter, Ellen Bradshaw’s “Winter Lower Manhattan” captures the cold, quiet calm of a city street at night. Her ability to convey tones with which the New Yorker can immediately identify with is amazing, whether it’s the loneliness of a deserted Fulton Fish Market, or the coziness of a gentle snowstorm in ”Snowbound Manhattan.” It’s her ability to effectively tell the full the story with a brush that adds her to the roster of my new favorite artists. 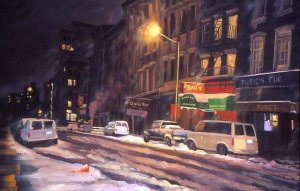 “Five Women Artists in New York” will be on exhibit through June 29. For more information visit www.flushingtownhall.org.